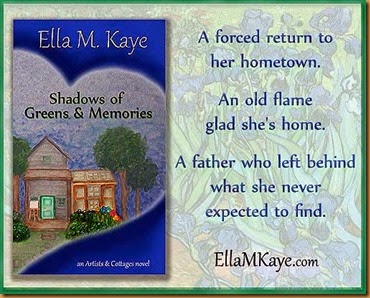 from the upcoming Shadows of Greens & Memories:

~~~~
”I might not understand much of anything else, but I know who and what I am. The biggest change is that I don’t apologize for it or hide from it any longer.”

G.F. looked out over the yard, listened to the crickets and to an owl in the distance, and devoured the brownie she’d handed him. Maybe the most luscious brownie he’d ever had. Though he knew it could be the company and the front porch in the dark and the quiet of nature that made it taste so good. Plain? He never guessed Francis Barrett would ever see herself as plain.

He wiped crumbs off his fingers onto the sides of his jeans. “You know... I kind of think you have that backwards.”

Shadows of Greens & Memories is the first of the Artists & Cottages series by Ella M. Kaye. Due February 2015 from Elucidate Publishing.

And the Cover Reveal: 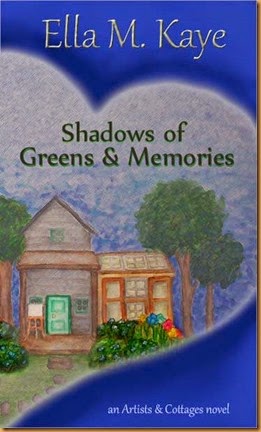