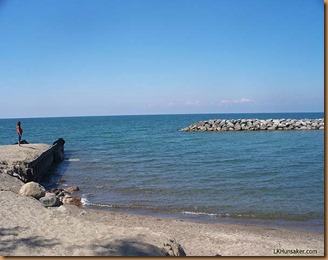 Have you ever dipped your toes in a lake or an ocean? Remember that feeling of being a small part of big nature, of how vast the body of water, of how much lie underneath its surface we never see? Or maybe you only thought of how the cold nipped your skin or how the moss was slimy under your feet.

I think I may have been a fish in a previous life. Or a mermaid, perhaps? The water calls to me and I feel a much larger part of the world when actively engaged with it, whether on a boat on a lake, ambling along the ocean’s edge, or swimming in a crystal clear pool, even in the shower. That first dip of my toes in water, any water, even in muddy rain puddles as a child, is a magical experience.

Caroline, from Pier Lights, feels the same. The Atlantic is more than only a way to cool off from summer’s heat. It’s a connection.

~~ ~~ ~~
With a shake of the head to rid herself of the thoughts, Caroline crossed the street with a slow jog and sank into the sight of the water, the beautiful blue green gray expanse stretching to the sky, held back softly by the gray white brown sand. There were the irksome couples hand-in-hand again but she looked past them. It was quieter without the dance on the pier, a special occasion locals and tourists looked forward to and Caroline both enjoyed and detested. The music she loved. The people she didn’t.

Caroline dropped her sarong and her towel near one of the wooden sentries and heal-toed into the water. She walked in up to her knees, waited to let her body get used to the cold, then up to her thighs, then bent and lunged in with an easy breast stroke. She swam under the pier, in between the large poles, her favorite place on the beach, even as a child. Her mother warned her to go out into the sun; there were more likely starfish to bother in the coolness of the shade from the pier. It only made her more determined to stay in the shade and keep an eye out for starfish to add to her collection. Her mother hated when she took the things out of the water or off the beach.

Not today. She didn’t look for starfish today. She wanted the stretch of her muscles, the exertion of her body, the physical activity that was second only to dance on her love list.
~~ ~~ ~~

The photo above is from Lake Erie, off Presque Isle. 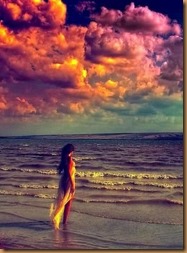 
The electricity sparked in her body. Her skin tingled. Her heart rate accelerated as she felt his legs close to her back, as she felt him crouch behind her. His fingers sent a shock through her soul as they reached up to smooth her hair from the side of her face.