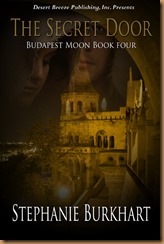 Welcome to my first Wednesday Whispers – where I’ll be chatting briefly with writers about their lights in the dark.

Today I’m glad to host author Stephanie Burkhart. You’ll find her bio at the end, along with where you can find her work.

Stephanie was happy to turn this interview over to the hero of her newest release, The Secret Door, book four of the Budapest Moon series. Let me introduce you to Lord Zoltan Kristos by asking him a few questions:

EMK: Lord Kristos, since your story is set in Budapest, I’d first like to ask if there is anything about the Hungarian city that makes your life more difficult?

Zoltan: Budapest is a city that never sleeps and I have a very important job in the government– I'm the Minister of the Interior. The Regent, Miklós Horthy, is the closest man I have to a 'friend,' but I always have to be on my guard around him and others. I'm a werewolf. It's a secret I must keep from the world or I would lose everything I've worked so hard to earn. I must constantly be on guard when I'm in the city and when the moon is full in Budapest, I keep to myself in my residence, Darkhölme.

EMK: Ah, and what do you like best about Budapest?

Zoltan: That it never sleeps. There's always something to do. Budapest is home to Hungary's budding movie industry and I like going to the movies to escape from my problems, if just for a little bit.

EMK: You have help from a friend, so I hear, but even friends can have their dark side. What is Sophia’s worst feature or characteristic?

Zoltan: (chuckles) Sophia? A worst feature? Never. I love everything about her. (smiles) She can be quite obstinate – and stubborn – though. I find the trait endearing. She makes me see outside my world. She takes me to places that are uncomfortable.

EMK: What is her best feature?

Zoltan: Her aura. The light that surrounds her sooths my soul – it tames my restlessness – it calms me. I've never known that feeling of peace until meeting her.

EMK: She sounds like a wonderful partner. So what does Sophia have to deal with on the other side of the coin? What is your own worst characteristic?

Zoltan: If I dwell on my problems, I can be very demanding. I'm used to getting my own way and when I don't get my way I can become very 'bossy,' as Sophia puts it.

EMK: What is your best?

Zoltan: It is not easy for me to trust – trusting Sophia is the hardest thing I've ever done. Allowing myself to trust her has allowed me to see the world in a better light.

EMK: Finally, when the tunnel feels too dark to crawl out of, what makes you keep going?

Zoltan: Knowing that others depend on me. When the Great War ended, I traveled from the front lines in Germany to Hungary on foot because I knew I had to get back home. My father needed me to help him, but on the way, I was attacked by wolves who turned me into a werewolf. I was scared, but I knew my father would accept me regardless, only when I got home to Miskolc, my father and sisters were on their death beds from influenza. Thank the Heavens for Konrad. He was my father's friend and discovered I was a werewolf. He accepted me for what I was and helped me to bury my family. My father owned a store, Kos, that employed a lot of people, but the Communists who took over Miskolc confiscated everything everyone in the city owned. I had to help them. They depended on my family for security and I was all they had left. I helped them regain our city back. My hard work in helping Miskolc recover from the war was noticed by the Regent who asked me to become the Minister of Reconstruction and then the Minister of the Interior. His confidence in me inspired me. I wasn't just helping my city now, I was helping my nation. Still, I needed help to deal with the full moon. It wasn't easy finding a witch to attend to my needs, but Inna came into my life just when I needed her. I kept her safe and she taught me how to deal with my lupine condition. Then there's Sophia – her light drives to me go outside of my comfort zone and meet the challenges I encounter now.

EMK: Thank you, Lord Zoltan Kristos, for spending some time with us.

If you’d like to find more of Zoltan and Sophia’s story, you can find The Secret Door by Stephanie Burkhart on the publisher’s site, with excerpt and reviews, or from most major ebook retailers. 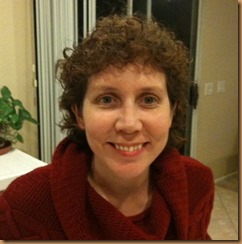 Stephanie Burkhart is a 911 Dispatcher for LAPD. Born and raised in Manchester, New Hampshire she now lives in Castaic, CA. She spent 11 years in the US Army as an MP (military police), and earned a BS in Political Science from California Baptist University. She loves chocolate and is addicted to coffee. She enjoys being a cub/boy scout mom and just signed up to be an assistant den leader for her son's Tiger den. 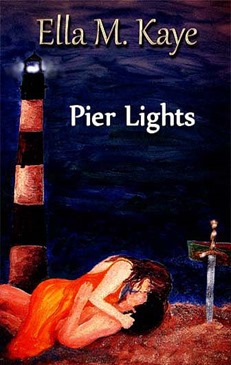 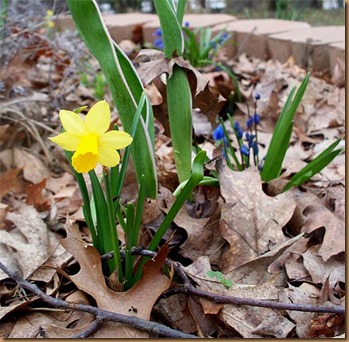 That moment,
not officially the first spring day,
but that day
when it’s warm enough
and the forecast
is promising enough…

and the sun shines heavenly.

Dance is far more than a sport. It’s more than strength and stamina and balance and technique and work and more work and sacrifice and competition. Dance is expression. It’s art.

Kellie Pickler’s dance on Monday night’s DWTS as her husband sang a song he wrote to her was a truly Magical dance. You can see her feel the song, the emotions, the movement, the dance.

Making the viewer, or the reader, truly see and feel the emotion… that’s true art.

And then we get the added emotion of that sweet kiss at the end, where she had to be called away from him because she was so lost in the moment.