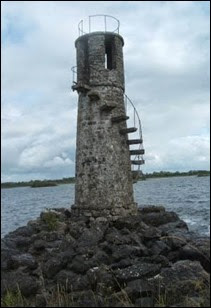 Do you read the comments under blog posts? I do. Often. Not always. I’m glad I do often, though, because some of the best material can come from comments.

This is Ballycurrin Lighthouse near Galway, Ireland. It’s the setting for a short scene in my current WIP which is currently unnamed. Most of the story is in Provincetown, Massachusetts, but my hero is from Galway so using this neat little lighthouse I found on Pinterest is a nod to him. Of course the inspiration of the photo is never enough for me. I research. I research a lot more than I end up using. While Fillan, my ballroom dance teacher hero, is contemplating something (can’t say much – no spoilers), this little lighthouse, the only inland lighthouse in Ireland according to my research, plays a part in his thoughts.

The photo [©Peter Goulding] and the post about how Mr. Goudling, lighthouse explorer, got to this spot to take this photo were indeed helpful in story development, although this scene is a very small part of the story. A comment about a story that varies from the “official” story of why this inland lighthouse was built caught my attention even more. It could be a story itself. In the least, it had to have a place in Fillan’s story.

The truth of why something was done is often of very small consequence to novelists. What a little story or myth does to the imagination is paramount, though. The story is the thing. It’s often far more interesting than “official” fact and who knows, it could be actual fact. It doesn’t matter much. Fiction should make you think, wonder, imagine, expand.

[Find the original post and photo here. Thank you to Mr. Goulding for leaving permission to use your articles with acknowledgment.]

For other photos from the story and that inspired the story, see my Pinterest Board.