Pre-Release Excerpt: Gillian and the Crows 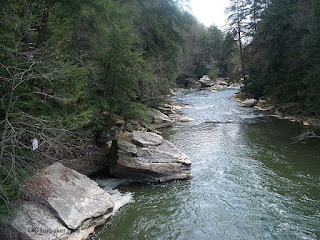 The following excerpt is from a work in progress. Do not quote. May change in edits.

Gillian made her way to the door and knocked, lightly at first, then louder when there was no reply. Someone lived there. It was obvious between the open windows and tire tracks that led around the back. She knocked harder. No reply. No stirring. No sound other than the raucous crows swirling above the trees that gave her a creepy feeling.

She didn’t like birds. Well, canaries in cages were fine. They were pretty. Small. Non-threatening. She could deal with canaries. Those were no canaries. They were crows. Gillian had read that crows were smart. Not a comforting thought, as far as she was concerned.

She shivered. In the heat.

No one home. Lovely. She’d have to continue up the small-ass road and see what else she came across. For all she knew, it was just over the hill.

Cursing inwardly, Gillian made her way back to her car, clenched her jaw when the tires skidded on gravel, and eased back onto the road, such as it was.

After what must have been five more miles, she shook her head and turned back. She’d wait for someone to return to the little cottage and ask if she was in the right place. With any luck, they’d at least be as friendly as Henry and wish her well, at least in health. Everyone she’d met in the area, other than that cabbie, had been very friendly. Polite. Well-mannered. She figured it would extend decently up into the mountains.

This time she pulled in front of the cottage and walked boldly to the front door. A fool thought just because something was safe the first time, it would continue to be so, but she felt it, anyway.

Again no answer, and she hadn’t expected different. She wasn’t about to sit in the car that by now would be hot again already, so she wandered the front yard, noticed the large stack of wood, considered walking around to the back but thought better of it. No use offending the owner if he returned to find her being so nosy. It would be hard to ask for assistance that way.

Instead, she wandered away from the place, just a bit into the tree line the front door looked out over. She hesitated at a rustling and looked over to find a couple of squirrels chasing each other. Mating, she supposed. At least something didn’t let the heat bother them.

Something other than the crows, which now circled to the side of her, to what she thought was northeast. Who needed a compass when you had instinct? Gillian should have told Henry that when he asked if she had a compass...

The thought of crows circling stopped her in her tracks. Crows circled dying things while waiting for food. Was the owner out there? Injured? Surely anyone living out here would be well prepared and capable of taking care of himself.

Still, maybe she could return the favor of Henry’s rescue by helping someone else. Not sure what on earth she would do about it if it was a man who would by all rights be heavier than she could handle, Gillian at least could run back to the car and drive to town for help.

Either way, she had to check, so she headed the direction of the crows, fighting her own fear of them, and hurried her steps.

It was a rough patch of land. A couple of times her Keds got stuck and pulled off a foot and she had to stop long enough to get it back on. A couple of times she lost her balance and scuffed herself. As long as she didn’t break something, she could deal with scuffs. She was never low on scuffs and scratches as a child. If needed, makeup would cover them well enough when she returned to Denver. But she did have to be able to drive back to...

Water. She heard what sounded like trickling water. Slowing her steps and hanging onto small young trees as she made her way down the small ravine, she saw the water. A little stream. Not terribly little. But beautiful, nestled beneath the trees where it was shaded. A soft wind rustled the leaves above it and harmonized with the trickling sound.

Gillian had to treat herself for the punishment of the last couple of days. She’d soak her hot feet in the stream and sit and rest a bit before continuing. Her break. Everyone got breaks at work. She might as well allow herself the same.

~~~~~~~~~
Durango, Colorado.
A small time reporter for a small time paper trying to make a name for herself.
A mountain hermit who wants nothing to do with publicity.